More than 100 years on, Lyttelton Port remains a logistics hub connecting Antarctic explorers from across the world to the wonders of the Ross Sea. 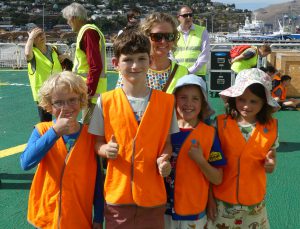 This Antarctic Season (November 2018 to March 2019) the Lyttelton Port Company welcomed 10 visits from five Antarctic vessels, a pit stop on their way to and from the ice.

Modern Antarctic exploration focuses on gaining scientific knowledge about the world’s climate and ocean systems and the ecology of the vast continent and surrounding ocean.

Antarctica is also used as an analogue of future space exploration with similar extreme conditions and challenges requiring expertise and technical innovation.

“This connection between Lyttelton and the Ross Sea has a history going back more than 100 years, to the days of Scott and Shackleton, and the reasons for coming back to Lyttelton remain the same for the “Antarctic Explorers” of today – friendly people delivering exceptional service.”

Mr Kennedy says the latest Antarctic sector economic impact report estimates the current total economic impact of all Antarctic related activities to the Canterbury region at $235 million. It also contributes around 3,500 jobs within the local region.

A highlight of this season was when the South Korean Icebreaker Araon held an open day and tour for local Christchurch schools and Antarctic scientists.

“Everyone was impressed by the engineering of the ship itself, from its icebreaking technology to its engines.

“It was also great to get an insight into the range of scientific research that is undertaken on the various laboratories on board.”

The future of Antarctic exploration is looking even busier with a major rebuild of McMurdo Station, says Mr Kennedy, which is a United States Antarctic research centre on the south tip of Ross Island.