A love of Lyttelton and an afternoon watching a ship come in, led to a new career as a Cargo Handler for LPC’s Mike Searle. 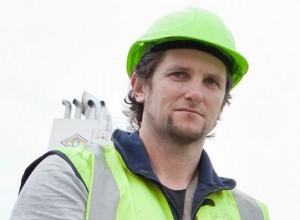 Known as ‘Roadkill’ by his workmates (a nickname from years ago that has stuck), Mike has now been at the Port for nine years this coming February.

“I was watching the boats come into the Port from my deck one afternoon and thought ‘Id love to work there’. I’ve always been around machinery. Like so many country kids, I was driving a tractor from an early age. Ever since then I’ve loved learning to work machines.”

Mike says it’s the ultimate job for those who enjoy variety and new challenges. “As a Cargo Handler, one shift you might be driving a crane, the next you might be on the straddle – the big yellow machines that move and stack the containers.”

One of the machines Mike drives is the newest and largest of the four green cranes that are such a prominent part of the Port landscape. Mike is one of only 37 LPC Crane Drivers. LPC Cargo Handlers, like other LPC employees, undergo extensive ongoing training that not only makes for a safer Port, but also gives staff valuable new skills. Crane driving is just one of Mike’s roles, and it’s not a job for the faint hearted.

“Not all the guys choose to drive a crane. Some don’t fancy heights. I’m not scared of heights and when you’re up there working, you’re too focused on the task at hand to worry. You just have to think rationally.”

Mike says the Port is the ultimate team environment, and having staff work across a number of roles, as he has, makes things run more smoothly.

“I think that after being a Hatchman (the eyes and ears of the Crane Driver from a ship) you become a better Crane Driver. If you spend a while telling a Crane Driver what to look out for, you understand the operation from another perspective – and you can put what you know into practice.”

The Port’s 24/7 operation can be a drawcard for many people, offering a variety of hours and the opportunity to have time out during long, summer days. Working shifts enables Mike to live a much more flexible life. He’s a self confessed ‘morning hater’ who chooses not to have a regular nine-tofive schedule.

“You live three days at a time – yesterday, today and tomorrow. Anything outside of those three days is irrelevant. It can be anti-social with friends outside of the Port, but shift work suits me. Working afternoons allows me to go diving in the morning, while working nights lets me be around home a bit more.”

Like many jobs, the people can be as important as the work itself. “The guys you work with are also what make it. You couldn’t do it without them. You’re with the guys all the time so you get to know them all pretty well and some are pretty social too. I go diving with a couple of them when we have mornings off. And a bunch of us will sometimes go away for adventures and shenanigans on weekends.”

The Port is now firmly in the blood of Mike’s family, with son Maxwell – at only four – already having Port aspirations of his own: “I’ll lift a hundred boxes in the big crane – when I get bigger.”

As his Dad says, it’s the ultimate job.