One of the world’s largest dredges, the Fairway, is due to arrive in Lyttelton Harbour in August as the Port’s channel deepening project gets underway.

Lyttelton Port Company (LPC) was granted resource consent in March 2018 to dredge the harbour shipping channel to increase its draft.

The 230 metre-long Fairway will collect sand and silt from the seabed of the harbour, as it works to widen the navigation channel by 20 metres and deepen it to allow vessels with a 13.3 metre draft to call at Lyttelton. The first stage of work will see the Fairway lengthen the channel by 2.5km and will take 11 weeks to complete.

The channel deepening, which will allow bigger ships to access the Port, will provide Canterbury’s importers and exporters the best possible and most-cost effective international shipping solutions.

The initial stage of the dredging programme has been awarded to Netherlands-based contractor Royal Boskalis Westminster N.V. – a global operator with more than 100 years’ experience. Built in 1997, the Fairway is one of Boskalis’ 30 trailing suction hopper dredgers.

The Fairway will make its journey from Mumbai, India, after completing its latest project – and make a stop in Singapore for a thorough clean before heading to Lyttelton Harbour. The Cawthron Institute has worked with LPC and Boskalis to develop a biosecurity plan.

In Singapore, it will go into a dry dock to be water blasted and have its antifoul refreshed. The interior spaces will be cleaned and flushed with fresh water. After being inspected, it will sail directly to New Zealand.

In anticipation of the channel deepening, LPC has already implemented the largest environmental monitoring programme ever undertaken for a New Zealand dredging project. Environment Canterbury is satisfied that LPC’s plans balance what is best for the environment, the community and the growing regional economy.

While the Fairway is hard at work, a plume will be clearly visible from the dredge, but LPC Environmental Advisor Jared Pettersson says this is a normal aspect of the dredging process on the seafloor.

“We have implemented New Zealand’s most robust real-time water quality monitoring system that will ensure the proposed dredging does not result in adverse outcomes for the environment.”

LPC achieved a mediated outcome with Ngai Tahu in regards to protecting the environmental and cultural value of Whakaraupō and Koukourārata.

As a result, LPC will cease dumping dredge spoil, from a previous consent, at Awaroa/Godley Head, Livingstone Bay, Breeze Bay and Mechanics Bay which are important breeding grounds for kaimoana.

The company will pay Te Rūnanga o Koukourārata and Te Hapū o Ngāti Wheke fisheries enhancement funding that will be used on projects to increase mahinga kai within Koukourārata and Whakaraupō (Lyttelton) harbours. There will be strict environmental limits for dredging and dumping spoil.

This video demonstrates how the dredge operates: https://we.tl/17NahmWTQY 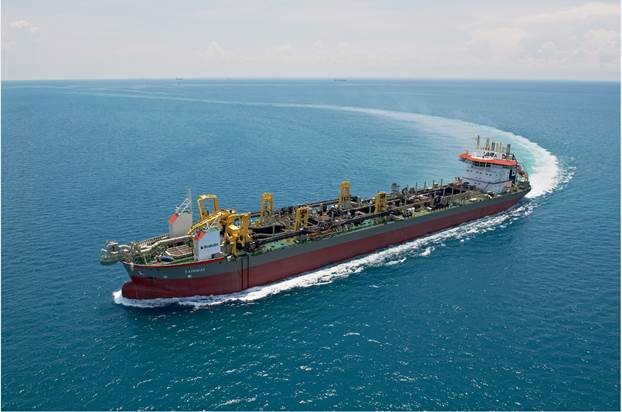 · During the past five years Lyttelton Port Company has made major investments in infrastructure, enhanced its high-performing operations and improved market-leading exporter and importer services and support.

· As the South Island’s largest container port, Lyttelton Port’s freight volumes are forecast to more than double in 30 years.

· An international trend in container shipping towards much bigger vessels is requiring many ports to deepen channels within their harbours to allow ships with deeper draft to visit.

· This is very similar to airports needing to extend their runways to accommodate bigger passenger jets.

· Currently, most container ships carry 4,000 twenty-foot equivalent units (TEUs), but making the channel deeper and wider will allow new larger vessels to load and offload up to 9,500 TEUs at a time.

· The Port is vital to the industries that are the engine of Canterbury’s regional economy – agriculture, manufacturing, construction, forestry and fishing. LPC is ready to manage the freight rise from the $264 million a year increase in agribusiness production resulting from irrigation projects such as Central Plains Water.