LPC has become a mission sponsor for the Canterbury West Coast Air Rescue Trust, supporting the rescue helicopter crews to carry out operations across both land and sea and ultimately save lives. 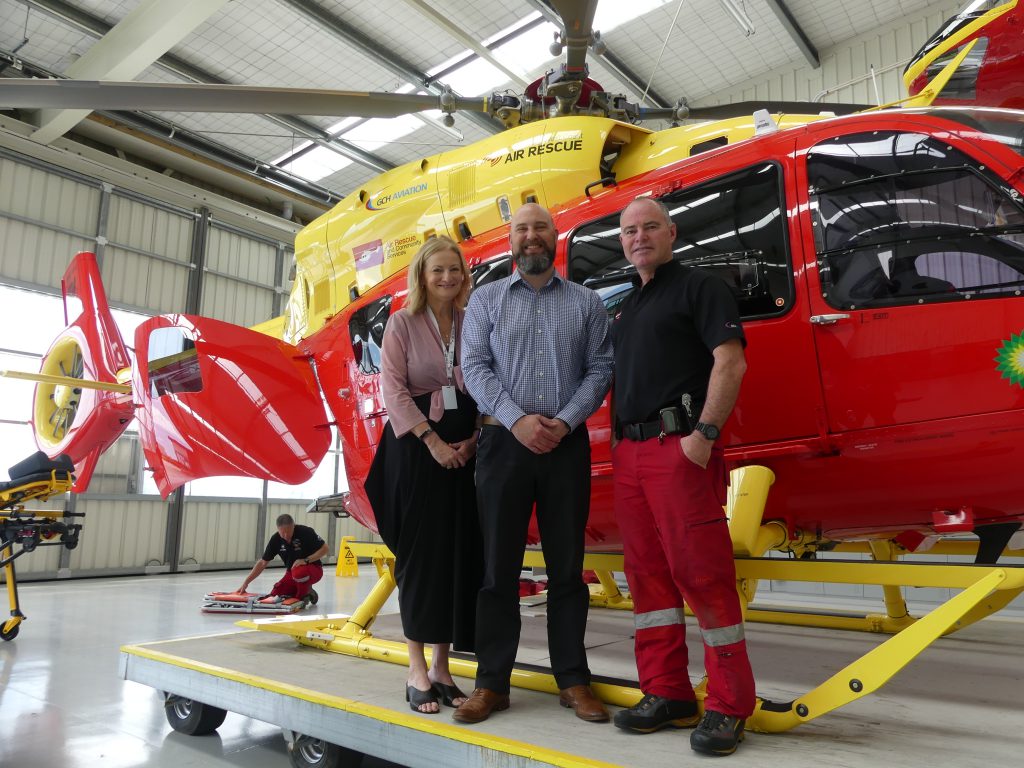 From their bases in Christchurch and Greymouth, the Trust covers the largest geographical location in New Zealand – from the Waitaki River south of Timaru to the Clarence River north of Kaikōura on the eastern side of the Southern Alps and from Haast to Karamea on the West Coast.

The rescue helicopter also responds to offshore emergencies along the Canterbury and West Coast coastlines.

The Trust’s Chief Executive Christine Prince says the service is only partly government-funded, so they rely on local communities and companies for support.

“When companies like LPC put their hands up and help by becoming a mission sponsor, this really does help save lives,” says Christine.

During the day, the rescue team responds to an emergency within 10 minutes and at night within 20 minutes, as getting to a patient and starting treatment is key.

“It is great that LPC has come on board to support the rescue helicopter and particularly so as our most complex and risky rescues are those offshore,” she says.

Juliet Fitzpatrick and Brent Williams are both intensive care paramedics with the Westpac Rescue Helicopter, and say offshore rescues on vessels can be extremely challenging.

“When doing an offshore winching rescue, you have to be aware that everything is a moving part, nothing is static,” they say.

Both paramedics have been involved in a number of offshore jobs from very small fishing vessels to cruise ships. Conditions are always challenging for the rescue operations, which is why the best possible training is essential.

“Every year in May, all of the crew attend the boat winch training in Lyttelton Harbour. This year, it was particularly important as we had several new crew members,” says Christine.

The training is done with support from Spark Brothers Limited, which donates the use of a boat and crew. Having suffered a loss at sea, they know how critical this training and service is, says Christine.

The rescue helicopter crews also respond to numerous missions across Banks Peninsula due to the remote nature of the terrain and provide a lifeline in outlying areas, she says.

“As soon as our new H145 helicopter came into service in August, it was dispatched to an accident on board a vessel that was over 60 kilometres off shore.”

The introduction of the new H145 rescue helicopter is a major milestone for the service. The helicopter is the first of its kind to be used for emergency medical services in New Zealand, with increased range, engine power and space.

It also has advanced avionic and auto-pilot features including auto-hovering and auto-levelling on approach, raising the bar in emergency air response for the region.

LPC Strategic Engagement Manager Phil de Joux says the Port is proud to back such a vital service for the Canterbury region.

“The Port is committed to supporting the communities in which we operate, and that includes supporting the hundreds of vessels and their crews that call at Lyttelton each year. The Canterbury West Coast air rescue service impacts the lives of so people during emergency situations, so we’re proud to lend our support.”