In the last 12 months Lyttelton Port Company (LPC) has achieved major milestones which set the Port up to meet Canterbury’s freight demands for the next 30 years.

LPC Chief Executive Peter Davie says a critical milestone was obtaining the resource consents that will allow the infrastructure development required to efficiently manage the forecast doubling of Canterbury freight volumes in the next 15 years.

“This consolidates the Port’s positon as the South Island’s trade gateway and supports Canterbury’s growth and prosperity,” he said.

“It was vital we obtained the resource consents that permit dredging of the Harbour shipping channel to deepen and extend it, as well as the expansion of the Container Terminal land area at Te Awaparahi Bay. These two developments are crucial for the Port to grow Canterbury’s trade. The dredging programme means larger container ships, which have virtually doubled in size during the last 10 years, will be able to call at Lyttelton.

“At the same time we will expand the reclamation by 24 hectares and construct a new 700 metre container wharf. A key focus of our long term plans is to move our operations to the east, away from the local community. The additional reclamation also facilitates this shift.

“In the past year record container volume and strong export and import growth has been achieved. We had a 5.7% increase in containers, with 424,560 TEUs flowing through the Port compared to 401,711 in the previous year. Container volume would have been even higher but industrial action in March and April reduced TEUs by about 10,000.

“MidlandPort, providing the first rail connection for container freight between Rolleston and Lyttelton, continues to go from strength to strength as it services the increasing production from Canterbury’s heartland. Customer and container numbers are steadily growing and a third train service between Rolleston and the Port will start soon. The most recent customer is Canterbury’s largest warehousing and logistics operator, MOVE Logistics. It has also attracted container freight from leading exporters such as ANZCO, The Warehouse Group, Synlait Milk, and Talley’s Group.

“Establishing MidlandPort also reflects LPC’s commitment to supporting the Greater Transport Statement. So too, is the introduction of a Vehicle Booking System at our other Inland Port, CityDepot in Woolston. By booking an arrival time slot on line, trucking companies now avoid queuing when they reach CityDepot, saving time and costs.

“In April LPC completed the development of Canterbury’s only walk-on floating marina, Te Ana Marina. This is the Company’s first step toward regenerating the Inner Harbour as a vibrant community-focused destination with connections to the Lyttelton Township. LPC owns and manages the 170-berth marina. 84% of the berths are already occupied and there is strong business interest in leasing the landside development as a hospitality hub.

“In July construction started on the Port’s new cruise berth. It is New Zealand’s first ever custom-built cruise ship facility and will bring the world’s largest cruise ships to Canterbury. This key infrastructure will support regional tourism growth and contribute to the local and national economy. The wharf was redesigned in recent months to reduce underwater noise levels during piling. A marine piling management plan is also in place to manage potential risks to Hector’s dolphins. The cruise berth is expected to be completed for the 2020/2021 summer cruise season.

“LPC’s investment in world-class infrastructure continued with the addition of a new $12.5 million Liebherr crane which replaced the Port’s oldest crane.

“In December our operations and administration staff moved into a state-of the art facility, Waterfront House, which brought these teams together for the first time under one roof. The building’s environment encourages closer working relationships, also enhancing morale.The new facility is part of LPC’s committed presence in Lyttelton and our focus on providing staff with high quality amenities.

“Our revenues grew strongly in the year, being up by 7%. This was mainly driven by the Container Terminal and MidlandPort. Our overall profitability at EBITDA level was ahead of budget and on par with last year even though we experienced strike action in the later part of the year which impacted profitability.

“A number of decisions were taken in the year which impacted year on year profitability but set us up well for the future. These include hiring additional staff in the Container Terminal to meet customer demand which, due to their nature, are a step change in cost. We have also invested more in our Health and Safety function. Strong operational performance generated $122 million in revenue, an increase of $7.6 million on the previous financial year, resulting in a net profit after tax of $12 million.

“We experienced an increase in rail costs due to the success of MidlandPort, and the rises in fuel prices were much more significant than anticipated.

“At a macro level, both imports and exports increased significantly in the last financial year. Imports rose from $4.1 billion to $4.67 billion, while exports were $4.84 billion compared to $4.7 billion the previous year.

“LPC has a strong focus on understanding critical risks and ensuring Health and Safety processes are embedded across the business. These include implementing Safe Work Method Statements and Job Safety Analysis as part of the overall Health and Safety framework. The focus has shifted from traditional Health and Safety performance measures towards lead indicators.

“LPC’s partnership in the Whakaraupō/Lyttelton Harbour Catchment Management Plan reflects our commitment to restoring the ecological and cultural health of the Harbour as mahinga kai. The Plan concentrates on four key areas – erosion and sedimentation, pollution, terrestrial indigenous biodiversity, and marine indigenous biodiversity. A suite of actions are underway to support continual progress toward a better future for the harbour.

“LPC is integrating sustainability through every aspect of the business. It is a key focus as the Company future proofs operations to meet customer needs, continues to facilitate regional economic prosperity through trade, engages with the community and supports the health of the environment in which we operate”.

The table below shows the operating result. 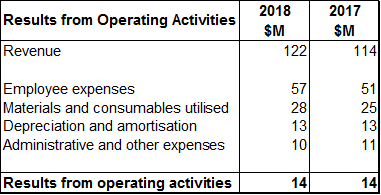