Joanne Laing has always loved the sea. She grew up in Lyttelton and at 18 she and two mates in the Lyttelton Sea Venturers were accepted as apprentices in the Union Steam Ship Company. Check out the video. 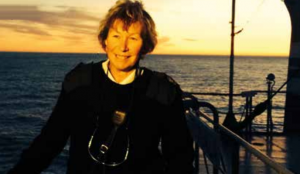 She was one of the very few female apprentices taken on. Seventeen years later, after maritime experience around the world, the three friends came back to Lyttelton to work as Marine Pilots in the harbour they grew up in.

It had taken ten years of study and experience to obtain the Master Foreign Going Certificate which allowed Joanne to become a Pilot at Lyttelton.

“You go through three major exams over that time,” Joanne says. “There are written and oral exams. You have to get 80% to pass. If you fail one you have to go back and do the whole lot again.”

“I was away at sea for 17 years. My first command was a container ship owned by the Colombian Coffee Federation and she was on a service between the UK, Europe and Central America. I also had commands on bulk carriers carrying forest products from British Columbia to Japan, Korea, the UK and Europe.

“That experience helps here because different ships have different manoeuvrability and characteristics – so when you board a ship to guide her into the harbour you know the ship operation and the lingo.”

A major part of her role as a Marine Pilot is going out in one of LPC’s two Pilot boats to meet a vessel, climbing up the rope ladder on the side of the ship, meeting the Captain and discussing the manoeuvre into Port. This includes the number of tugs involved, any traffic in the channel, how much under keel
clearance the vessel needs and the number of lines to the berth. “The biggest challenge is the weather. You’re always watching the weather. It’s a dynamic situation. Things are changing all the time.”

Being the only woman Marine Pilot in New Zealand and having worked all her career in a largely male
dominated occupation has never phased Joanne. “It’s not something I’ve really thought much about. I’m bigger than a lot of people so that’s always helped. When I first went to sea as an apprentice they
carried a lot of wives on board and when I worked out of Hong Kong for ten years we had wives and children on the ships. It’s just that in New Zealand there have been a lot of women who’ve gone through maritime careers but no one’s actually had a position as a Marine Pilot before.”

It can be a demanding job, not least the shift work. “We have three different shifts. There’s the ‘am’ shift from 1am to midday – then the midday to 1am shift – and then there’s 24 hour coverage. That means if we have two jobs with vessels at the same time then the second Pilot, who is on 24 hour coverage, comes out to do the second job. We get two weekends off out of five.”

“It’s a great job. Great people. Every day is different,” Joanne is standing on the deck of the vessel she’s bringing in. She’s watching the ink black night change into a golden dawn. She smiles: “It’s just a great environment to work in.”