For LPC Marine Pilot, Finlay Laird, working at Lyttelton Port allows him to live and work where he loves best. 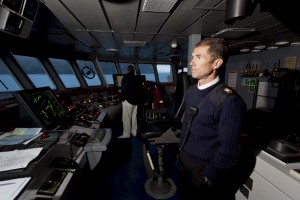 Maritime life is in Finlay’s blood. He’s a Lyttelton lad, the son of a ship’s carpenter, and one of six  LPC Marine Pilots who meet large ships at the head of the harbour, climb a rope ladder to board them and then join the ship’s Captain on the bridge to advise how to approach Lyttelton Port.

Finlay, or one of the other Marine Pilots, can be seen in the yellow pilot launch ‘Awaroa’ chugging across the water each day to the harbour heads. He has spent over 30 years in a career on the sea. In 1982 he started sea life as a Deck Cadet and over the next 15 years he climbed the ranks to First Officer and acquired his Master’s Ticket.

“I did my ticket while my friends were in other countries doing their OE. My job took me all round New Zealand, Australia, Japan and the Pacific Islands.”

Having seen so many different places and ports, Finlay knew exactly where he wanted to settle when it was time to return to work on terra firma.

In 1997 he moved to a land based role at Lyttelton Port. This coincided with the birth of his daughter. “I know exactly how long it’s been since I moved back to land by the age of my daughter – she’s 16 now. Being around to see her grow into the young woman she is today has been a major perk of being based on land. A lot of the men I worked with at sea had families back on land they really missed – it made things tough.”

The working life of a Marine Pilot is immensely satisfying yet challenging, a combination Finlay thrives on. Marine Pilots bring enormous skill to the job, built up from years of observation and experience.

“It is not for the faint-hearted and the temperament and skills needed to climb the ranks sort out those who are suitable for the job.”

It’s not just technical skills that count in this demanding role.

“You need to know the harbour inside out and also have the understanding of how different vessels fare in different conditions. As a Marine Pilot, your role is to guide the Captain of the ship and his crew to safely approach and depart from your port under any conditions – with or without navigational aids.” A Marine Pilot needs to be calm, methodical and thorough, but flexible enough to deal with ever changing conditions, different ships’ crews and handling the wide range of vessels. “The harbour is never the same two days running and no two ships are the same, so there are a lot of variables to consider. A Marine Pilot needs the wisdom and experience to handle the unexpected and be able to lead others to get the job done.

“It takes much more than a Pilot to bring a ship into Port – it’s a real team effort. The Pilot is in constant communication with the Captain, who guides his crew, the Tug boat crew who pull the ship into berth and the linesmen who tie the vessel to the wharf.”

There are many reasons why Finlay loves his job.

“I am happy to be based at Lyttelton not only because it’s where I’m from, but a lot of ports are ugly and industrial looking. Lyttelton Harbour is beautiful and seeing the harbour every day is probably the best thing about the job.”