Home » About Us » Port History

Find out more about the History of Lyttelton Port of Christchurch. 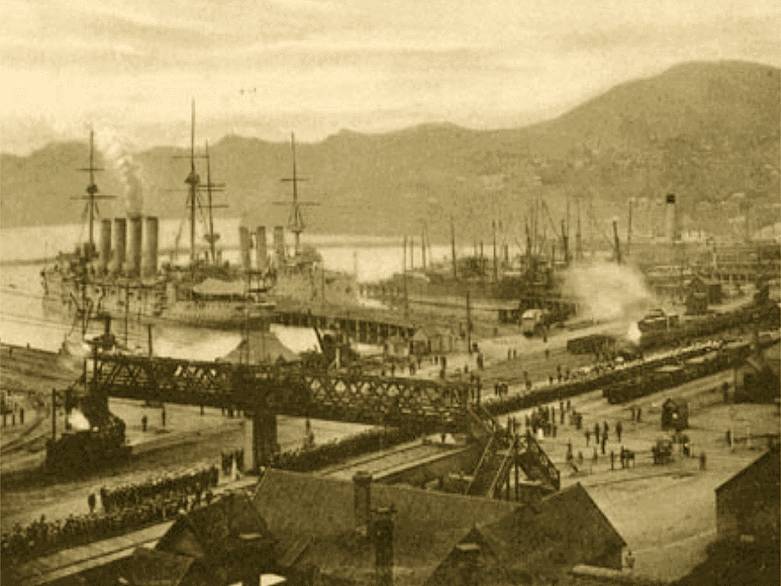 The Port and town of Lyttelton are on the north shore of Lyttelton Harbour, a sea inlet in the north-west of Banks Peninsula on the coast of Canterbury in the South Island of New Zealand.

Banks Peninsula is a volcanic island, built of lava from two craters situated in what are now upper reaches of Lyttelton and Akaroa harbours. Erosion and changes at the end of the last Ice Age resulted in the drowning of both craters.

Lyttelton Harbour, called Te Whaka, or Te Whakaraupō (the harbour of bullrush reeds) by the Māori and Port Cooper by one of the earliest white visitors, runs westwards for 13 kilometres between two headlands, about two kilometres ride. Māori has lived in and around the area since 800AD.

16 February
Banks Peninsula is first sighted by Europeans from the Endeavour during James Cook’s first voyage to New Zealand.

The settlement of Canterbury, named after the mother diocese of the Church of England, is planned by the Canterbury Association in Britain. The aim is to found a specifically Church of England colony. Lyttelton is chosen because of its suitability as a port and the availability of a large area of flat land on the other side of the Port Hills, later known as the Canterbury Plains.

The first edition of the ‘Lyttelton Times’, which later became ‘The Press’, is printed.

Lyttelton gaol opens, accepting the worst criminals, debtors and lunatics from all over the South Island. Seven hangings took place there. Its hard labour gang built most of the roads and stone walls around Lyttelton. They also built Fort Jervois on Ripapa Island and the Quarantine Station on Quail Island.

The Lyttelton Rail Tunnel is opened. It is the world’s first tunnel through volcanic rock.

The Lyttelton Harbour Board was established, responsible for the management of the harbour’s commercial and recreational facilities. The Board had 13 members elected in local body elections.

A weekly passenger service between Lyttelton and Wellington begins on the steamer Penguin (749 tons).

72 acres (29 hectares) of reclaimed land at Naval Point is consolidated and sites are available for business.

Reclamation at Cashin Quay begins following the recommendation by the Harbour Board’s Engineer-in-Chief, James A Cashin, that larger vessels do not require the protection of the Inner Harbour as swells were not larger than one metre.

The Container Terminal is completed.

The Lyttelton-Wellington passenger ferry ends after 80 years of service.

The new Lyttelton Harbour Board building opens on the corner of Norwich Quay and Dublin Street.

The introduction of the Port Companies Act created the Lyttelton Port Company which took over the Port’s commercial role including the land, assets and facilities. Shares in the new Port Company were allocated to regional and territorial authorities including Ashburton, Banks Peninsula, Hurunui, Selwyn and Waimakariri District Councils and the Christchurch City Council.

October
The Government abolishes the Waterfront Industry Commission Act under which port labour was administered. This meant that stevedores (who load and unload ships) were required to employ their own workforce and function under the Labour Relations Act in the same manner as any other employer. LPC employees increase from 298 to 426.

July
The Lyttelton Port Company lists on the New Zealand Stock Exchange with a 19 per cent public listing following the decision by Hurunui and Selwyn District Councils to sell their shares in the Company.

April
Other regional and territorial authorities decide to sell their shares, effectively raising the level of public shareholding to 30 per cent. The Christchurch City Council becomes the single largest shareholder with a 65 per cent shareholding.

4 September
At 4:35am a 7.1 earthquake shakes the Canterbury region. The earthquakes over the 2010/11 period damaged over 75% of the Port’s wharves.

November
LPC hands over to ECan the information package from its extensive public consultation on the Port Lyttelton Plan, the Company’s 30-year vision for the recovery and enhancement of the Port.

December
LPC buys a 27-hectare site at Rolleston to be the Company’s second Inland Port. The facility, named MidlandPort, will provide a rail link with the Port in 2016.

April
Environment Canterbury releases its preliminary draft Lyttelton Port Recovery Plan for public consultation and receives 277 submissions by the close of submissions on May 11.

June
An Independent Public Hearing is held, with recommendations from the Panel being presented to the Minister for Canterbury Earthquake Recovery.

Demolition begins on the former LPC administration building on the corner of Norwich Quay and Dublin Street.

Waterfront House, LPC’s new Head Office, opened, bringing the Operations and Administration teams under one roof for the first time.

Resource consents granted to extend the reclamation and deepen the Harbour’s shipping channel so larger vessels can access the Port.

One of the world’s largest dredges, the Fairway, arrived to extend and deepen the shipping Harbour channel.

LPC has commissioned archaeologists to undertake an on-going study into Lyttelton’s Martine history. The study was commissioned to assess the heritage value of structures on the port and establish what needs to be done to record and preserve the history. Archaeologist Matt Carter from Underground Overground was commissioned to undertake a Port wide study in real time from both the land and the water. The study also included an assessment of LPC’s extensive historical collection of maps and plans.

Outcomes of the study identified structures and areas with significant heritage values including recommendations on how LPC could record and preserve the ports rich history while still enabling the recovery and future development of the port. Recommendations from the study also allowed LPC to obtain a global archaeological authority under the Heritage NZ Act. The authority enables LPC to undertake recovery projects without loosing Lyttelton’s rich maritime history.

The archaeological study is ongoing and archaeologists play a significant role throughout LPCs recovery projects.

Recording heritage sites at the Port

Prior to work commencing on heritage sites at the Port an archaeologist in engaged to record any artefacts and structures with heritage significance. Recording techniques are to archaeological standards and can include scaled lined drawings to represent any historical value.

As LPC’s development projects at the Port are completed we will make the archaeological reports publically available here.

This project involve trenching from No.7 wharf in the Inner Harbour through to the Oxford Street overbridge as part of upgrading the high voltage electricity supply to the Port to provide greater resilience for the power supply. Several known archaeological sites were in the area of the trench works. Archaeological monitoring was undertaken when any sites were part of the project. As the project works progressed a couple of artefacts were uncovered and recorded. The reports provide a summary of what was uncovered and their context in Lyttelton’s history.

This project involved rebuilding the Pumphouse facility on the dry dock.
Construction of the project required a small amount of excavation into the original Pumphouse building foundations. The report includes some great pictures of the dry dock being used as a swimming pool.

This project involved paving and an upgrade to the existing storm water treatment system in the log storage area along Norwich Quay.
This project involved excavation into an area of significance for both European and Maori heritage. The project uncovered 89 artefact’s including the old railway turn table.