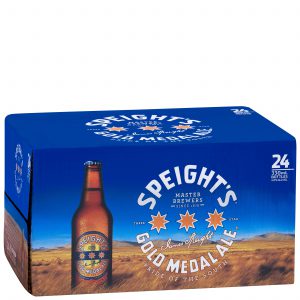 Speights, Steinlager and Corona – these iconic beer brands synonymous with kiwi BBQs and after-work drinks are all shipped through Lyttelton Port before they hit the South Island’s shelves.

Lion is New Zealand’s largest alcohol beverage company, who produce, market, sell and distribute many of the country’s best-loved drinks such as Speight’s, Steinlager, Mac’s, Emerson’s and Panhead, as well as international favourites like Stella Artois, Guinness and Corona.

Ben Archibald from Lion’s Customer Logistics team says that while Lion produces tap beer in Dunedin at the Speight’s and Emerson’s Breweries, the vast majority of other Lion products are shipped domestically from Auckland to Lyttelton to supply the South Island’s supermarkets, bars, restaurants and traditional liquor stores.

“Each year around 3,200 40-foot containers filled with Lion products are moved through LPC,” says Ben.

“This equates to roughly 35 million litres of Lion product moving from the North Island to the South Island through Lyttelton.”

If you equated that volume to 12-packs of beer, it would be around 9 million, says Ben.

When Lion’s containers filled with beer, wine, cider and non-alcohol beverages arrive in Lyttelton, they are handled by LPC’s container terminal team before being moved by Sorted Logistics and taken to Lion’s warehouse in Hornby, run by MOVE Logistics.

As such a major player in New Zealand’s beverage industry, Lion’s Sustainability Manager, Kat McDonald, says that Lion recognises the impact their operations and supply chain can have on the environment.

“We aim to continuously innovate across our supply chain, working collectively with suppliers, customers and the industry to minimise any adverse impact and drive net positive change for the environment.”

Earlier this month, Lion New Zealand were excited to announce that their entire organisation is now Toitū certified carbonzero, making Lion the first large-scale beverage company in New Zealand to do so.

Lion also opened a sustainable microbrewery in 2018, The Fermentist in Christchurch, who are committed to treading lightly on the environment, producing a refreshing range of accessible craft beers.

With a focus firmly on the sustainable future of New Zealand’s favourite beverages, LPC is proud to play a part in Lion’s South Island supply chain.