Nathan Mauger knows how to spot a sporting opportunity, and when he walked onto the basketball court at the Lyttelton Recreation Centre, he knew something had to be done about the hoops.

He knew because he played pick-up games there after school as a primary student 30 years ago with the same hoops. So, he decided to do something about it.

After the 43-year-old former All Blacks and Crusaders centre stepped away from rugby, he turned his hand to managing the Lyttelton Recreation Centre – one of his favourite haunts as a youngster.

“I had heard there was a lot of keen basketballers in the community, so I took a look at the existing backboards and hoops and realised they were there when I was in my youth about 30 years ago – well and truly past their last legs,” Nathan said.

“I asked some of the young basketballers we had down here one night about them and they said, ‘they’re a bit of an eyesore – we need an upgrade’.” 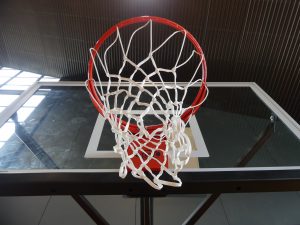 And so Nathan, with some funding and help from Lyttelton Engineering, Kotahi Engineering Studio, and Lyttelton Port Company, was able to bring the court into the 21st century with a set of brand-new hoops and backboards.

“Within about 24 hours, our local rangatahi were in here and playing for hours on end. Now we regularly have youth come in here a lot more to play and it’s attracted a significant number of new faces into the facility,” Nathan said.

“We’ve developed a basketball programme to compliment the new hoops. The first night we probably had about 20 guys here playing. It’s all self-managed, no refs, just an honesty system. We ask for a koha on the day and we just make up teams and play,” he said.

Lyttelton Port Company Chief Executive Officer Roger Gray said when the opportunity arose to work with the recreation centre, he simply couldn’t turn it down.

“This project is one that clearly aligns with our sponsorship goal to make our community a better place to live and work in, through exercise and sport. Nathan and his team are doing great stuff at the rec centre and we’re glad to be a part of that,” he said.