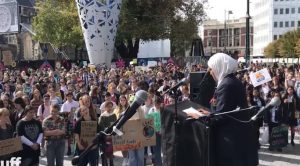 At just 16 years-old, Huda Mazharuddin is already a shining beacon for her community, and was recently recognised for her extraordinary volunteering efforts.

This includes being a guide at the Al Noor Mosque after the 15th of March attacks, UNICEF fundraisers, and working with Te Ara Kakariki. Huda also supported nurses with their Covid vaccination rollouts.

The annual GirlBoss Awards recognise trailblazing young women aged 11 – 18 from across Aotearoa. There are up to 12 winners each year in categories such as STEM, Community, Enterprise, and Arts & Culture. 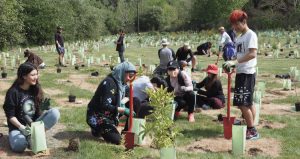 Huda is one of 13 phenomenal young Kiwi women aged between 11 and 18 who were recognised at the GirlBoss Awards recently.

Huda said she was shocked to receive the award, having thrown her name in the ring as the opportunity presented itself.

“I didn’t see it coming, I applied and thought I should go for the opportunity. I wasn’t expecting much and wanted to give it a go.

“When I got it, I was overwhelmed and shocked. I just thought what I did was pretty normal and would be what anyone would do,” she said.

Huda said the achievement she is most proud of is her self-run UNICEF fundraiser for Yemeni children.

“(I’m most proud of the) fundraiser I did at my school. Because it was my idea, really – with the help of my team. It was sort of a test for myself, because this is how I was starting my own path.

“Before, opportunities came my way, but this time I took it upon myself to make my own move after learning about the crisis more,” Huda said.

That fundraiser received double Huda’s original target and was passed on to UNICEF to assist in Yemen’s humanitarian crisis.

Huda said there’s no time for her and her team to rest either.

“Right now, I’m focusing on another Yemen fundraiser. I’m working with UNICEF on it. We’re working together on an idea of a fundraiser and hopefully will incorporate other schools too.

“I want to leave a big legacy for myself, and a legacy for my school too. It’s another motivation to do well with these projects,” she said.

LPC Acting CEO Kirstie Gardener said she was proud to be supporting such a worthy cause and was glad to see other companies jumping on board too.

“I was able to have a quick chat with Huda after she was named the winner of the Volunteering Award. She’s got a great head on her shoulders, I’m sure she’ll go far. LPC is proud to be involved with the sponsorship of an awards ceremony like this.

“It’s so important that we are able to role model this kind of pathway to the younger generations, to show them there is a place for women at all levels of an organisation, and in all industries,” she said.