As work on the Cruise Berth comes to completion, we have been able to return the Lyttelton Lighthouse, a historic piece of infrastructure, to its rightful home on the eastern mole in Whakaraupō / Lyttelton Harbour.

The lighthouse was built in 1878, and before advances in technology, it was an essential piece of navigation infrastructure for many years, guiding ships into the Harbour.

In 2010, when the first of many earthquakes devastated Christchurch, it caused a large amount of irreparable damage on the wharf the lighthouse sat on, leaving it on a 15-degree lean.

Our team quickly worked to remove the lighthouse to save the iconic structure and prevent further damage.

LPC Engineer Neil McLennan says the Port team always anticipated that it would return to its original position.

“The welfare of the lighthouse provided some welcome light relief during the challenging early days of our earthquake response, but we all understood that it was part of our Port heritage, important to the Lyttelton community and that we needed to take care of it,” says Neil.

Moving the lighthouse is no easy feat as the wooden structure weighs 9 tonnes.

Using a crane, the lighthouse was lifted onto a truck, moved down Norwich Quay and around through to the end of the eastern mole structure, the same place it stood for 140 years before the earthquakes.

Although the lighthouse will no longer be part of the Port’s navigation infrastructure, there will be a white display light visible at night.

Thanks to HEB construction, Smiths Cranes and all LPC teams that ensured that this historic lighthouse was returned to the eastern mole.

“We have reached the end of a phase of significant port rebuilding. Following the completion of the cruise berth, the lighthouse is a fitting reminder of the situation we found ourselves in over 10 years ago, and the significant progress our port has made since that time,” says Neil. 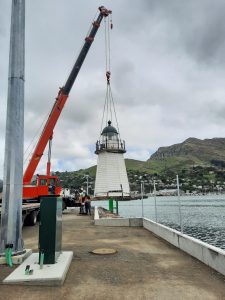 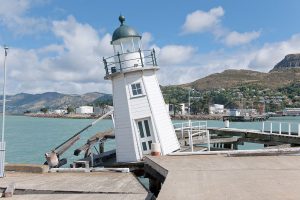 Photo left: Lyttelton Lighthouse being lifted by crane into place

Photo right: The lighthouse after the 2010 Christchurch earthquake