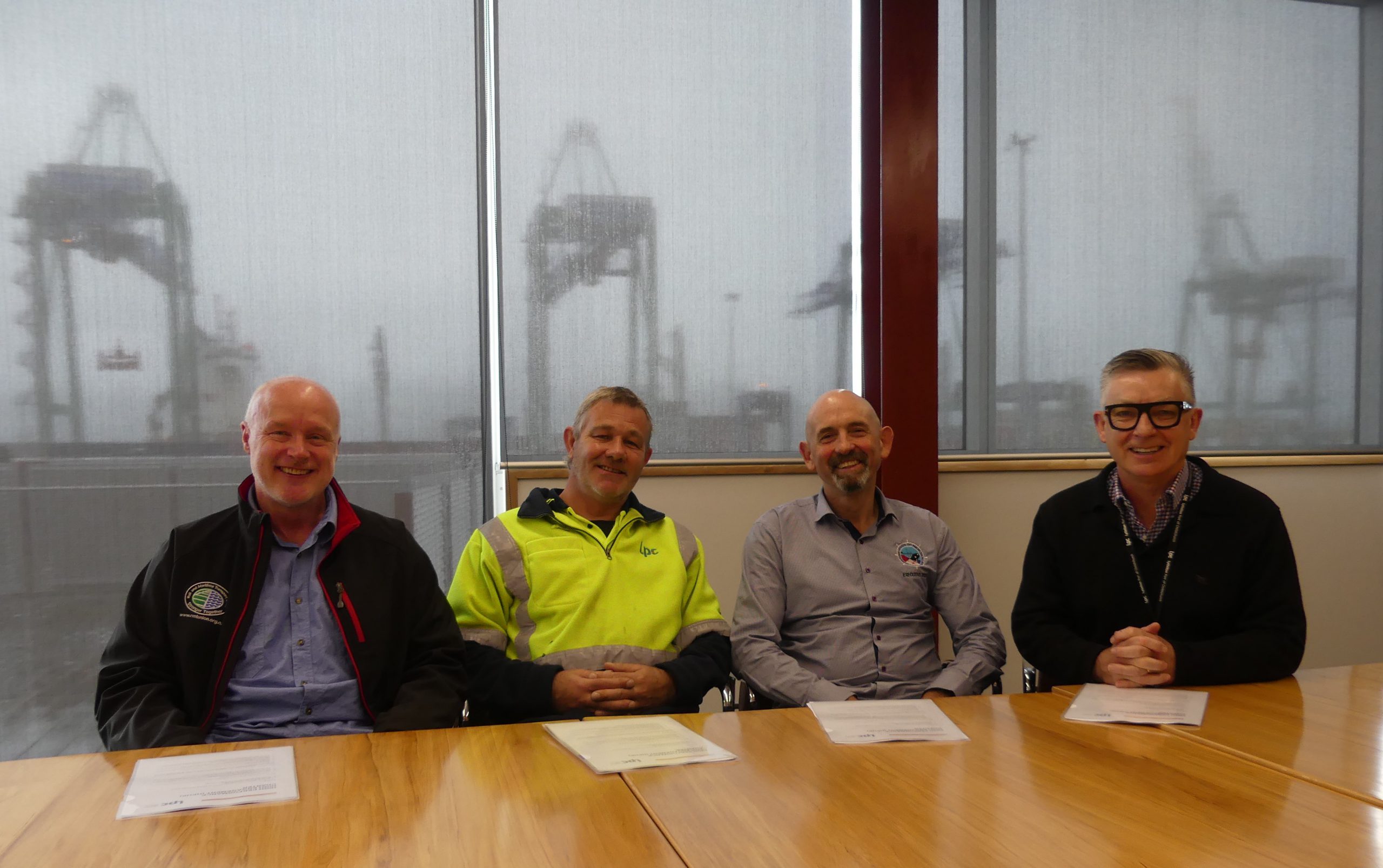 The Charter jointly commits LPC and the unions representing LPC employees to each other’s success and the development and fostering of a safe, cooperative and inclusive culture.  It lays out shared aims and outcomes for Lyttelton Port and its workers, and specifies decision-making and engagement protocols for HPHE processes.

Roger Gray, LPC’s CEO, welcomed the agreement and signing and thanked all those involved in the process.

“This is a historic moment for Lyttelton Port.  The process to reach this agreement has been a positive and cooperative experience for all those involved, and has already laid the groundwork for the future,” says Roger.

“LPC is committed to creating a more cooperative and positive workplace, and to giving our unions a genuine voice.  The history of the Port has been one of industrial conflict, but we want to move forward to create an environment of mutual respect and problem-solving based on an understanding of each other’s interests,” said Roger.

“We entered into the process to discuss HPHE with some trepidation as historically all parties have had their misunderstandings with each other.  However, as we learnt more about HPHE and what it involves, we can see that it is necessary for MUNZ to be involved to help deliver key priorities for our members and the Port,” says Gerard Loader, President of MUNZ Local 43 (Lyttelton Branch).

“MUNZ Local 43’s priorities include security of employment and superior conditions for our members, facilitating LPC’s role as the crucial link in the Canterbury and wider South Island economy, better consultation enabling improved productivity and leading safety standards, and helping to keep Lyttelton Port in the ownership of the ratepayers of Christchurch, which benefits everyone in the region.

“We are also committed to continually improving the relationship between LPC and unions through a better understanding of the business’s requirements while ensuring workers have a real say on the future direction of the Port,” said Gerard.

Heiner Benecke, RMTU Lyttelton Branch Secretary commented, “The RMTU see the HPHE Charter as a landmark in industrial relations at Lyttelton Port Company and has great hopes for the benefits this agreement can bring to our members, Lyttelton Port and the wider Canterbury community.”

“This Charter lays the foundation for a new way of doing things at Lyttelton that is based on cooperation and mutual respect. It is a marked departure from the very entrenched adversarial approach that has been the hallmark of the relationship between LPC and the waterfront unions for many years,” said Heiner.

Errol Walker, LPC AWUNZ Delegate, said, “AWUNZ and I are pleased to be signing up to HPHE and working together in a co-operative, respectful, and meaningful way with LPC and the other unions. We look forward to contributing to HPHE with the common aim in place of achieving a more profitable and sustainable company, a safer and healthier work environment, security of employment, and improved wages and conditions.

“I would like to thank the AWUNZ members for their support and trust by unanimously voting to agree to the HPHE charter and process, and giving it a fair and reasonable opportunity to succeed. We look forward to seeing the positive changes that this agreed commitment and process may bring,” said Errol.

The agreement was signed on 29 October 2021 in the LPC Boardroom by LPC and the three unions.  The combined unions represent 95% of LPC’s collectivised workforce.

For more information on the HPHE model, see the FAQ document attached.

For media enquiries and photos of the charter signing, please contact: lpccommunications@lpc.co.nz  / 021 196 1686