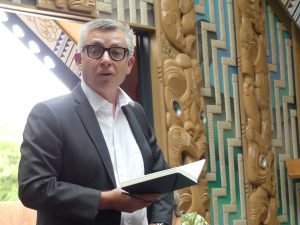 At the latest governance group meeting in June, representatives from each partner organisation confirmed Roger’s appointment.

The kaupapa/purpose of the plan is to restore the ecological and cultural health of Whakaraupō/Lyttelton Harbour as mahinga kai.

“The Port is part of the fabric of Whakaraupō/Lyttelton Harbour, and because of that we are firmly focused on ensuring the sustainability of our environment, and the Port, which supports thousands of jobs, for future generations.

“I believe having these key players sitting at the same table is vital to ensuring the success of our vision.”

Roger says he is also proud to work alongside Yvette from Te Hapū o Ngāti Wheke as co-chair, who he describes as a champion of Whakaraupō.

“Yvette has played a vital role in the programme since it’s inception, so I am proud to walk alongside her as co-chair, and together take the project forward.”

Yvette says it is the perfect time in the project’s development for a co-chair to be appointed.

“It makes sense for the Governance Group to be jointly chaired by Manawhenua and the Port, who have such a longstanding relationship around Whakaraupō – I’m really pleased.”