Lyttelton Netball Club is shining bright, thanks to a little kiwi ingenuity and support from LPC. 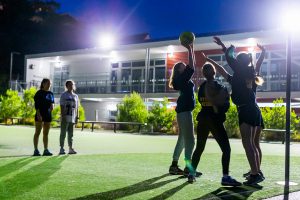 The Lyttelton Primary School Netball Court is home to the Lyttelton Netball Club, a group of around 65 players from primary through to young adults, who are passionate about the game and developing young local players.

But the Club’s Treasurer and Secretary Jane Walders says in the darker winter months, the players could not practice after 6pm because there were no lights on the court.

The Club approached LPC, and our Strategic Engagement Manager Phil de Joux says it was a ‘no brainer’ for the Port to lend a hand.

LPC funded the purchase and installation of flood lights on the Lyttelton Primary School roof, lighting up the netball court when the sun goes down.

Jane says the flood lights have been a real boost for the Club, extending their evening training time.

“All of our high school-aged players have to get from school in Christchurch back to Lyttelton for training, usually by bus, which meant they had to rush down to the court after school so we could fit in training before it got dark.

“Now we don’t have to be in any rush, we can just focus on training.”

The new lights also mean the club can play social adults netball on a Monday night once everyone is home from work.