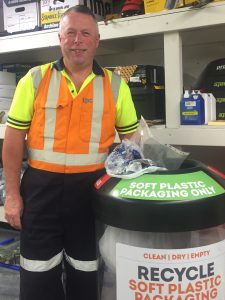 Taking the next step in our journey to be a waste-free port, LPC has invested in soft plastic recycling.

Soft plastic is large issue in the world of waste – often with a single use and ending up in landfill due to the inability to be recycled in regular facilities.

In recent years, businesses have found end-of-life solutions for soft plastic, with collection points available in large supermarkets and retailers – something Cargo Handler Jeff was happy to be involved with at home.

“Everything from lolly and biscuit packets to the plastic inside the Weet-Bix box, I was collecting it all up to take to the local supermarket,” says Jeff.

“I then started to notice how much plastic we were throwing out at LPC – especially with our PPE. It all comes in plastic packages, which end up in the bin.”

Jeff took it upon himself to start collecting this rubbish and recycling it himself.

“Everyone has something they can do, so I just started to do my bit to help LPC reach the waste-free goal,” says Jeff.

LPC’s sustainability strategy commits to a goal of zero waste to landfill by 2040.

As Jeff slowly began to raise awareness amongst his workmates, he eventually got the support for LPC to join The Packaging Forum and bring in a recycling bin.

“I know there’s a cost involved but I think the gain is worth it,” says Jeff.

“Not only are we stopping the plastic from ending up in the landfill, but it gets everyone involved and hopefully more people will start doing it at home as well – it’s all about education.”

The soft plastic is collected from LPC by the Soft Plastic Recycling Scheme to be sent to a range of New Zealand companies.

Thanks to Jeff, LPC is proud to be recycling soft plastic.

“We have one bin at the moment, but I already know there are more places around LPC that need them and more plastic we could be saving from landfill,” says Jeff.

“I know I’m not saving the world, but I know we can do better and this is the first step.”