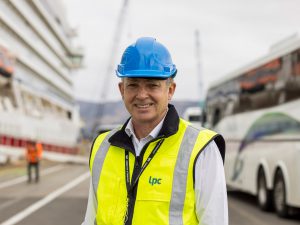 LPC CEO Roger Gray has announced he will be leaving LPC after two years at the helm.

Roger is an important part of the LPC whānau and we wish him the best for his next journey, as he takes on the role of CEO of Ports of Auckland.

“Timing is never perfect in these things, but I’m very proud of what we’ve achieved in the two years that I’ve been CEO here at LPC,” says Roger.

Through his time in Whakaraupō/Lyttelton, Roger has overseen the beginnings of a workplace culture transformation, huge investment in infrastructure including the new eastern development, and record-breaking container volumes through the terminal.

“We made a commitment to improve our profitability and I think we’re doing a fantastic job towards that. We are seeing record volumes through the Port and I’m deeply confident that we will deliver our $17.6 million budget this year,” he says.

Roger says another highlight was the work being done around the Maria Dew QC report and workplace culture changes.

“Culture and the change journey that we’re on with whanaungatanga is complicated and challenging. But I’ve been amazingly proud of the way so many of us have joined in and said, ‘yes, we want to make this place better and we can’.

“The thing I’m probably most proud of is our commitment to High Performance High Engagement (HPHE), and the fact that we have signed with three of our Unions and we’re committed to moving forward in a cooperative manner, where we work with our collective interests at heart, and we get stuff done for the benefit of everybody,” says Roger.

Roger will be with LPC until early March 2022, before starting his new role in Auckland in April.

“I will thoroughly miss working in the beautiful harbour, as well as all the people I have met along the way. Lyttelton is a strong community and it’s been fantastic to see their support for our operations and the work we do to be a good neighbour,” says Roger.

Chair Margaret Devlin said Roger has made a substantial contribution during his tenure.

“Roger has made a great contribution to the transformation of Lyttelton Port Company. Particularly leading the cultural change within the organisation. The Board joins with me in wishing Roger all the best for the future,” she says.