Our people are at the heart of LPC. From front line staff, engineers, business analysts and administrators, every employee plays an important part in our business.  We are proud to attract great staff, many of whom stay in the LPC team their entire career. Recent recruit Rhiannon Williamson shares why she joined LPC: 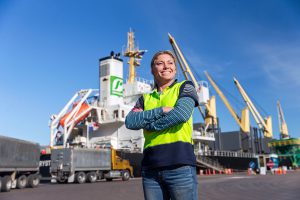 Rhiannon Williamson is the first female Port Services General Hand, but this distinction doesn’t feel like a big deal.

“They just treat me as one of the boys and we all work as a team. I was really welcomed. It’s a good group.”

Rhi – as everyone calls her – is not afraid of hard work.

“I can do anything,” she says with a grin.

Rhi grew up the youngest of three siblings and was always into cars and trucks. For five years, Rhi was a driver for Sanipak – collecting rubbish for LPC.

When the company changed hands recently, she decided to apply for a job at LPC and started with the Port Services team in April.

She still gets to drive trucks – part of her role includes driving LPC’s water truck that control dust around the Port. When she’s not behind the wheel of the water truck, Rhi and the Port Services Team are often found setting up one of the inner wharves for general cargo operations.

“It’s fun here. I get to use tools, take things apart, put things together. I love the variety of the work and I love being near the water. I’ve never been one to sit still.”

LPC’s Port Services Manager Tony Simpson says since Rhi joined the Port Services team, she has made a significant contribution, particularly in the general cargo and inner harbour area.

“She’s focused on ensuring the smooth operation of general cargo vessels and at the same time conscious of keeping herself and her coworkers safe.

“She’s enthusiastic, has a wealth of experience and has made a really positive impact on her team – Rhi has a really bright future ahead of her.”