Receival and delivery manager Abbey Clapp enjoys a good challenge. She first came to work at LPC when she was 18 years old. In her mid-20s, she left to do a five-year stint at transport company, NZ Express. 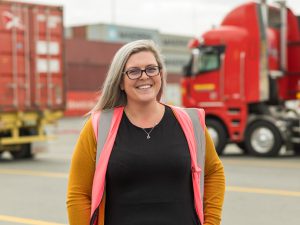 Two years ago she came back to LPC to take on the task of implementing a vehicle booking system, which has dramatically reduced waiting times and turnaround times for trucks at the port.

“When I was at NZ Express, it was common for drivers to be queuing for 1-3 hours. That made it hard to schedule the day or to predict the workload. We couldn’t give customers an accurate delivery time. As a dispatch manager, I would often start work feeling defeated,” Abbey says.

The vehicle booking system allows transport vehicles to book times to deliver and collect cargo from the port. In the past, trucks would turn up without a schedule and often faced long waits. The system has brought the average truck turn time down to around 30 minutes. Multiply that time savings by the 1200-1600 trucks coming through the depot and port each week and you have a lot of efficiencies saved.

Abbey says the challenges of her job are different every day – and she likes it that way. She says it has been very satisfying to oversee the implementation of a system that she knows makes a difference to transport companies all around the city.

Abbey manages eight people in her role and says the people make her job great. “There are a lot of people involved in making the vehicle booking system work – from the office staff to operations. Everyone is very friendly and positive. They just get in and get it done.”

Abbey says transport is still a male-dominated industry but she joined Women in Road Transport NZ to help change that. The organisation helped introduce flexible work options like shift sharing to make it easier for women with families to work in the industry.

“It’s getting harder to find drivers, so encouraging women and young people is one way to make sure we don’t have a shortage. Some women just have a lack of confidence so the organisation is about women raising each other up,” Abbey says.