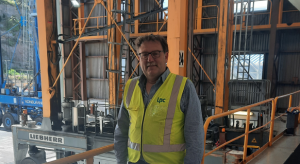 When Euan started painting cranes as a student in 1981, he didn’t know that would be the start of a lifelong career at LPC.

Now our Electrical Foreman, Euan has spent the past 40 years at LPC and, unsurprisingly, has seen some great changes.

“I left school to start an electrician apprenticeship with the Lyttelton Harbour Board, which took me four years.

“We looked after the electrical reticulation for the wharves, the offices and our equipment like the crane and tugs.

“Back then, we still had steam-powered equipment, with teams shoving coal in to keep it going,” says Euan.

Euan moved into the foreman role after the earthquake in 2012, stepping up to help everyone get through the challenges ahead.

“I think that’s what’s been good about this position. Understanding the management side was a challenge at first, but having worked here for so long, I really understand both sides of the relationship, which has helped me a lot,” says Euan.

Another one of Euan’s biggest challenges is how the industry has advanced.

“Our changes aren’t small. We move forward in a way that we have leaps and bounds with technology.

For Euan, that’s one of the things that’s kept him here all these years.

“There is always something to learn, and LPC is great at giving myself and the team opportunities to train and to pick up new skills,” says Euan.

A highlight for Euan was going to Ireland for three weeks to learn about our ship to shore container cranes.

“About 15 years ago, I went over to spend time at Liebherr to train with their team so I could support the new crane builds back in Lyttelton.

“It felt great when the company chose me to go over. That was an amazing experience,” says Euan.

Looking to the future, sustainability has also become a part of Euan’s role.

“There’s a need to monitor our consumption to help us understand how we use power at the Port. It’s been interesting working with different teams here and across our stakeholders to help support our sustainability targets,” says Euan.

Another thing Euan loves about the Port is the people.

“The team here really goes the distance. In what can be a high-pressure environment, we always get the job done and make things work – they take a lot of pride in that.”

As someone who was raised in Lyttelton, Euan has always had a connection to the Port.

“It helps drive me to do my best work. I know how important the Port is, and it’s great knowing that all the hard work I put in now will benefit people in the future.

“Knowing that, when you walk away, you’ve built it to a high standard, built it to last, that’s a pretty great feeling,” says Euan.