Some of this new land is already being used for imported vehicle storage. In early 2021 there will be approximately 16 hectares of new land at Te Awaparahi Bay for operational use.

The reclamation was created by placing acceptable and suitable fill material in Te Awaparahi Bay until the land reached the desired level.

Settlement of the new land is a major issue due to the soft seabed in the Harbour. To reduce this settlement time, the softer material from under the edge of the reclamation was dredged out.

Our quarry at Gollans Bay provided most of the fill material, with less than five per cent being building demolition rubble.

Fill material was placed from split hopper barges, or alternatively by ‘end-tipping’ from land,

We have to wait about two years for the new land to settle.

Reclaiming land can have effects on the environment, both during construction and in the longer term. We spent a lot of time with experts investigating and developing measures to mitigate potential effects.

We’ve also gained over six years experience constructing the first 10ha reclamation, which has helped us to understand how to best build the next stage.

To see how we managed the construction effects, check out the reclamation Construction Environmental Management plan here and the Quarry CEMP here.

Our quarry at Gollans Bay provided most of the fill material for the Te Awaparahi Bay reclamation project. The quarry development requires the excavation of hard rock in benches using drill and blast techniques with explosives.

There are no scheduled quarry blasts.

The project team do not programme blasts more than three weeks in advance and the call on the blast time is only made the morning before.

If blasts are planned to occur outside of these times, we will update this page.

To see how we are managing the construction effects, check out the Quarry Construction Environmental Management Plan here. 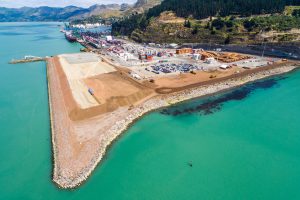